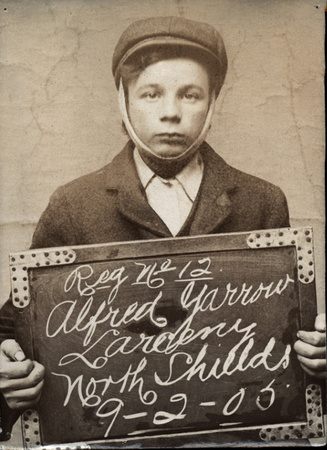 The Shields Daily News for 2 February 1905 reports:
"Alfred Yarrow (17), living in Beacon Street, was charged with being found lodging in a wash-house at 8 Walker Place, without any visible means of subsistence, and failing to give a good account of himself at 2.35 this morning. Chief Constable Huish asked for the youth to be remanded in custody for eight days. There was a case of larceny to be preferred against him. The Chief's application was granted."
The Shields Daily Gazette for 10 February 1905 reports:
"At North Shields, Alfred Yarrow (17) was charged with stealing on January 31st from a dwelling-house, 11 Hudson Street, one shirt and 4½ yards of cotton, value 4s 11d, the property of his mother, Jane Yarrow.
The prosecutrix said that she had had a great deal of trouble with her son. After she had missed the goods mentioned in the charge she asked him whether he had taken them and he replied that he had. Further evidence showed that the defendant pledged the goods for 1s 3d at the shop of Mr K.T. Driver, stating that his mother had sent him with them.
It was stated that the lad was charged with stealing a ring last October and was bound over for six months. Accused, who had nothing to say, was committed to prison for six weeks in the second division, and the chairman (Mr T. Young) hoped that the lenient treatment would be appreciated by him".
Kindly Shared By The Tyne And Wear Archives And Museums.
© UK Photo And Social History Archive
Powered by ZENFOLIO User Agreement
Cancel
Continue