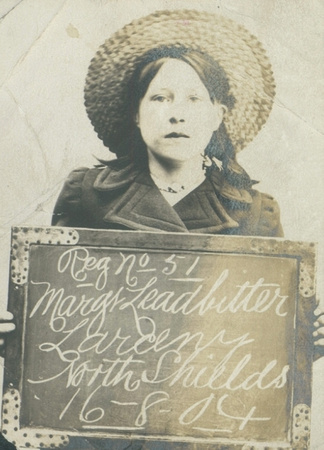 The Shields Daily Gazette for 16 August 1904 reports:
"At North Shields Margaret Leadbitter (12), 41 Wellington Street, was charged with stealing on August 11th, from the person of Sarah Moffott, while in Saville Street, the sum of 1s 2d, the money of Thompson Moffott, and further with stealing on the 6th inst from the person of Martha Ann Taylor, while in Linskill Street back lane, the sum of 2s, the money of Matthew Taylor. There was a third charge of stealing from the person which was not proceeded with.
The evidence in both cases was similar, young children having been sent to perform errands by their parents and being robbed by the accused. She was arrested by Detective Thornton. The girl pleaded guilty to both charges and said that she would not steal any more. The mother said that the child had never been in any trouble of this kind before. The father was bound over in the sum of 40s to ensure his daughter's good behaviour for six months".
Kindly Shared By Tyne And Wear Archives And Museums.
© UK Photo And Social History Archive
Powered by ZENFOLIO User Agreement
Cancel
Continue