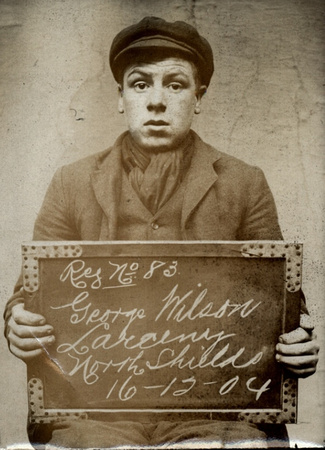 The Shields Daily Gazette for 16 December 1904 reports:
"At North Shields Geogre Wilson (17), a minor, was charged with stealing between the 13th and 15th inst. the sum of 3s, the moneys of his father Wm Wilson. Prosecutor said he resided at 15 Hudson St and the 13th inst. he placed three half-crowns and a shilling between the mattresses of the bed.
On the following day he missed 1 s and yesterday he missed half a crown. He gave information to the police. Insp Thornton spoke to apprehending the prisoner in Geo. Street. Previous to this he saw him in Hudson Street and on seeing him (witness) approach the house he ran away. When charged with the theft he made no reply. On being searched 2s was found in his possession. Prisoner pleaded not guilty. The father, recalled, said there was nobody but his son in the house during those three days. He had had a good deal of trouble with the lad since his mother's death sixteen months ago. The Chairman (Ald. Collins): Where did you get the 2s? Prisoner: I worked for it on the Fish Quay. The Chief Constable said that on the 26th of last month Wilson was bound over for six months at South Shields for theft. The magistrates committed him to prison for one month".
Kindly shared by Tyne And Wear Archives and Museums.
© UK Photo And Social History Archive
Powered by ZENFOLIO User Agreement
Cancel
Continue