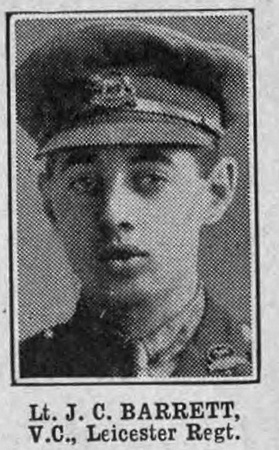 Colonel John Cridlan Barrett VC, TD (10 August 1897 − 7 March 1977) was 21 years old, and a lieutenant in the 1/5th Battalion, The Leicestershire Regiment,[2] British Army during the First World War when the following deed took place for which he was awarded the VC.

On 24 September 1918 at Pontruet, France, during an attack, owing to the darkness and smoke barrage, Lieutenant Barrett found himself advancing towards a trench containing numerous machine-guns. He at once collected all available men and charged the nearest group of guns and in spite of being wounded, gained the trench, personally disposing of two machine-guns and inflicting many casualties. Notwithstanding a second wound he then climbed out of the trench to fix his position and locate the enemy, then ordered his men to cut their way back to the battalion, which they did. He was again wounded, very seriously.[3]