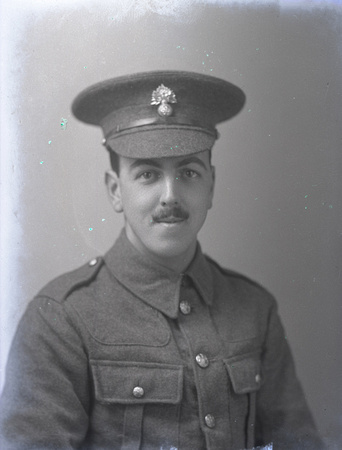 Photo taken 12th Dec 1914
I think this might possibly be Cecil Edmund Archer born in Streatham 12/7/1890 to Joseph and Fanny Archer. In 1911 He was a Stock Exchange clerk living in The Crescent, Leatherhead. He served with the 2nd London Regiment, Royal Fusiliers and had a spell in Malta, but was discharged in July 1916 as "no longer fit physically for war service". He married Ella Neate later in 1916. They were living in Bridge Street Leatherhead in 1939. One of his sons, Edmund Hedley Archer, was killed in action in 1941. Cecil himself died in 1955. They both get a mention on the Leatherhead war memorial.
Photo copied and cropped from The Past on Glass at Sutton Archives. Photographer David Knights-Whittome. Shared under the Creative Commons Non Commercial
© UK Photo And Social History Archive
Powered by ZENFOLIO User Agreement
Cancel
Continue