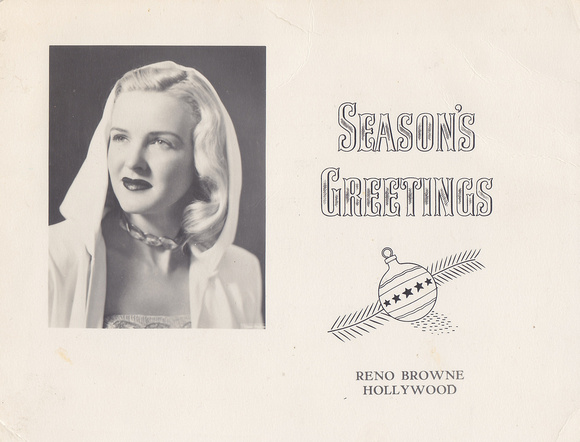 Born in Reno, Nevada, to wealthy parents, her father being a successful attorney, Browne graduated from a Dominican convent in San Rafael in 1941.
Browne first became a licensed pilot, and proficient at riding horses. After taking drama lessons, she embarked on a film career, signing a contract with Monogram Pictures. She starred with Whip Wilson in the 1949 western Haunted Trails, and that same year started a thirteen-episode radio show titled Reno Rides Again. Also in 1949 she starred in West of El Dorado with Max Terhune and Johnny Mack Brown. In total, she starred in fourteen westerns of the period, at times with Roy Rogers and Jimmy Wakely.
She and Dale Evans were the only western actresses to have their own comic books based on their characters, Browne having four issues published in 1950 by Marvel Comics. In 1950, Bill Haley and His Saddlemen recorded a single called "My Palomino and I"/"My Sweet Little Girl from Nevada" for Cowboy Records (CR 1701) which was released as by "Reno Browne and Her Buckaroos", even though Browne had no connection with the recording (though her photo did appear on the sheet music for the latter song.). Also in 1951, she was crowned Clovis Rodeo Queen in Clovis, California.
© UK Photo And Social History Archive
Powered by ZENFOLIO User Agreement
Cancel
Continue