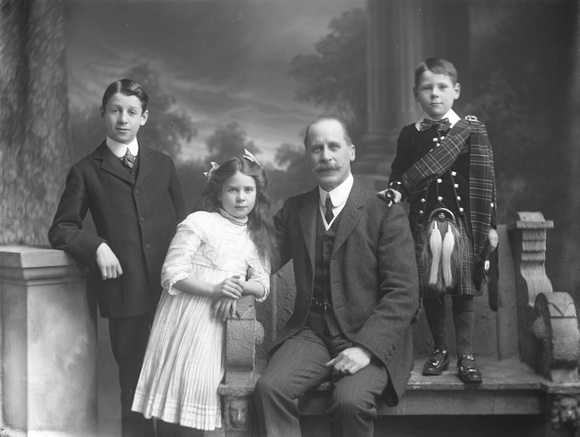 Horace Shepherd Folker With His Children Taken In January 1911

Horace Shepherd Folker with his three children - Leonard Barratt, Kathleen Margaret and Stuart Shepherd (wearing the kilt). Horace was born in Brighton in 1859 and became a successful auctioneer - moving to Guildford to work with his father. He married Margaret Barratt in 1895 and they had three children. On his retirement in 1908 they moved to Overton Road in Sutton, but Margaret died the following year.
Leonard was born in 1897 and married Setonette Scott Arnold
in 1924. He served as a Second Lt. in the Lincolnshire Regiment based in Belfast. Kathleen was born in 1901 and married John Riddel in 1923 - a manager from Glasgow. Stuart was born in 1905 and went to work in Kenya as an engineer and a farmer. (Source research carried out on behalf of the HLF funded Past on Glass/Ordinary Lives)
Photo copied and cropped from The Past on Glass at Sutton Archives. Photographer David Knights-Whittome. Shared under the Creative Commons Non Commercial
© UK Photo And Social History Archive
Powered by ZENFOLIO User Agreement
Cancel
Continue